Frontiers for Young Minds is a spin off of the traditional per-review journals which is dedicated to kids. The idea is to write a more broadly accessible article about scientific research which is then reviewed by children with their own eyes and knowledges.

This interesting exercise was experienced by BGEOSYS related scientists by the publication of “Virtual Reality: Using Computer Models to Learn About Arctic Climate Change“.

A very nice initiative which will perhaps arouse vocations.

The leaching of dissolved organic carbon (DOC) from soils to the river network is an overlooked component of the terrestrial soil C budget. Measurements of DOC concentrations in soil, runoff and drainage are scarce and their spatial distribution highly skewed towards industrialized countries. The contribution of terrestrial DOC leaching to the global‐scale C balance of terrestrial ecosystems thus remains poorly constrained. Here, using a process based, integrative, modelling approach to upscale from existing observations, we estimate a global terrestrial DOC leaching flux of 0.28 ± 0.07 Gt C year−1 which is conservative, as it only includes the contribution of mineral soils. Our results suggest that globally about 15% of the terrestrial Net Ecosystem Productivity (NEP, calculated as the difference between Net Primary Production and soil respiration) is exported to aquatic systems as leached DOC. In the tropical rainforest, the leached fraction of terrestrial NEP even reaches 22%. Furthermore, we simulated spatial‐temporal trends in DOC leaching from soil to the river networks from 1860 to 2010. We estimated a global increase in terrestrial DOC inputs to river network of 35 Tg C year−1 (14%) from 1860 to 2010. Despite their low global contribution to the DOC leaching flux, boreal regions have the highest relative increase (28%) while tropics have the lowest relative increase (9%) over the historical period (1860s compared to 2000s). The results from our observationally constrained model approach demonstrate that DOC leaching is a significant flux in the terrestrial C budget at regional and global scales.

Melting of the Greenland Ice Sheet is a leading cause of land-ice mass loss and cryosphere-attributed sea level rise. Blooms of pigmented glacier ice algae lower ice albedo and accelerate surface melting in the ice sheet’s southwest sector. Although glacier ice algae cause up to 13% of the surface melting in this region, the controls on bloom development remain poorly understood. Here we show a direct link between mineral phosphorus in surface ice and glacier ice algae biomass through the quantification of solid and fluid phase phosphorus reservoirs in surface habitats across the southwest ablation zone of the ice sheet. We demonstrate that nutrients from mineral dust likely drive glacier ice algal growth, and thereby identify mineral dust as a secondary control on ice sheet melting.

Around one third of current Arctic Ocean primary production sustained by rivers and coastal erosion.

In this study, a international team of scientists from the Institut Pierre Simon Laplace in Paris, the Université Libre de Bruxelles, and the Eidgenössische Technische Hochschule in Zürich, provides a first comprehensive estimate of nutrient inputs from rivers and coastal erosion to the Arctic Ocean, and a quantitative assessment of the importance of these two sources of nutrients for Arctic Ocean primary production. The riverine fluxes are based on observed monthly fluxes from the six largest Arctic rivers, whereas the fluxes from coastal erosion were calculated using satellite images of the Arctic coastline and measurements of the nutrient content in these eroding soils. The riverine and coastal erosion fluxes were then used to force a state-of-the-art high-resolution ocean-biogeochemical model. The results suggest that terrigenous nutrients sustain 28-51 % of the total Arctic Ocean productivity, with rivers accounting for 9-11 % of total Arctic Ocean and coastal erosion for 19-41 %.

In this study we evaluate the benthic fluxes of silicic acid along the West Antarctic Peninsula (WAP). Silicic acid (DSi) is one of the macronutrients essential in fuelling biological hot spots of diatom‐dominated primary production along the WAP. Here we measure the concentration and stable silicon isotopic composition of DSi in porewater profiles, biogenic silica content (BSi), and diatom abundance from sediment cores collected along the WAP. We couple these measurements with reaction‐transport modeling, to assess the DSi flux and the processes that release this key nutrient from the sediment into the overlying waters. Our results show that the benthic DSi flux is dominated by the diffusive flux, which is estimated to be equivalent to 26.7 ± 2.7 Gmol yr−1 for the WAP continental shelf. The DSi isotope profiles reveal the important impact of sedimentary processes on porewater DSi and suggest that biogenic silica dissolution is the main source of DSi in porewaters and consequently of the benthic fluxes. Our integrated data‐model assessment highlights the impact of surface productivity on sedimentary processes and the dynamic environment of core‐top sediments where dissolution and reverse weathering reactions control DSi exchanges.

During 2020 BGEOSYS was very active.

A comprehensive quantification of global nitrous oxide sources and sinks AUBURN, Ala. – Rising nitrous oxide emissions are jeopardizing climate goals and the Paris Accord, a study published in Nature, and led by an Auburn University researcher, has found.

The growing use of nitrogen fertilizers in the production of food worldwide is increasing concentrations of nitrous oxide in the atmosphere—a greenhouse gas 300 times more potent than carbon dioxide—which remains in the atmosphere longer than a human lifetime.

This finding is part of a study co-led by professor Hanqin Tian, director of the International Center for Climate and Global Change Research at Auburn University’s School of Forestry and Wildlife Sciences and Andrew Carnegie Fellow. The study was published today in Nature, the world’s most highly cited interdisciplinary science journal.

Tian co-led an international consortium of scientists from 48 research institutions in 14 countries under the umbrella of the Global Carbon Project and the International Nitrogen Initiative. The objective of the study, titled “A comprehensive quantification of global nitrous oxide sources and sinks,” was to produce the most comprehensive assessment to date of all sources and sinks of the potent greenhouse gas nitrous oxide.

The study points to an alarming trend affecting climate change: Nitrous oxide has risen 20 percent from pre-industrial levels and its growth has accelerated over recent decades due to emissions from various human activities.

“The dominant driver of the increase in atmospheric nitrous oxide comes from agriculture, and the growing demand for food and feed for animals will further increase global nitrous oxide emissions,” Tian said. “There is a conflict between the way we are feeding people and stabilizing the climate.”

Emissions from synthetic fertilizers dominate releases in China, India and the U.S., while emissions from the application of livestock manure as fertilizer dominates releases in Africa and South America, the study found. The highest growth rates in emissions are found in emerging economies, particularly Brazil, China and India, where crop production and livestock numbers have increased.

The co-authors agreed that the most surprising result of the study was the finding that current trends in nitrous oxide emissions are not compatible with pathways consistent to achieve the climate goals of the Paris Climate Agreement, or the Paris accord.

“Current emissions are tracking global temperature increases above 3 degrees Celsius, twice the temperature target of the Paris accord,” said Robert Jackson, a professor and coauthor from Stanford University and chair of the Global Carbon Project.

Microbial cells buried in subseafloor sediments comprise a substantial portion of Earth’s biosphere and control global biogeochemical cycles; however, the rate at which they use energy (i.e., power) is virtually unknown. Here, we quantify organic matter degradation and calculate the power utilization of microbial cells throughout Earth’s Quaternary-age subseafloor sediments. Aerobic respiration, sulfate reduction, and methanogenesis mediate 6.9, 64.5, and 28.6% of global subseafloor organic matter degradation, respectively. The total power utilization of the subseafloor sediment biosphere is 37.3 gigawatts, less than 0.1% of the power produced in the marine photic zone. Aerobic heterotrophs use the largest share of global power (54.5%) with a median power utilization of 2.23 × 10−18 watts per cell, while sulfate reducers and methanogens use 1.08 × 10−19 and 1.50 × 10−20 watts per cell, respectively. Most subseafloor cells subsist at energy fluxes lower than have previously been shown to support life, calling into question the power limit to life.

The oxygen isotope composition (δ18O) of marine sedimentary rocks has increased by 10 to 15 per mil since Archean time. Interpretation of this trend is hindered by the dual control of temperature and fluid δ18O on the rocks’ isotopic composition. A new δ18O record in marine iron oxides covering the past ~2000 million years shows a similar secular rise. Iron oxide precipitation experiments reveal a weakly temperature-dependent iron oxide–water oxygen isotope fractionation, suggesting that increasing seawater δ18O over time was the primary cause of the long-term rise in δ18O values of marine precipitates. The 18O enrichment may have been driven by an increase in terrestrial sediment cover, a change in the proportion of high- and low-temperature crustal alteration, or a combination of these and other factors.

Nutrient Factories under the Ice (NuttI): Quantifying the subglacial biogeochemical reactor and its response to climate change

Climate change is amplified in polar regions. As a consequence, ice sheets and glaciers (and in particular the Greenland Ice Sheet) are currently experiencing record melting, resulting in a significant increase of already substantial summer freshwater fluxes to the ocean. While the physical consequences of this freshwater input, as well as its alarming increase have been intensively studied, its biogeochemical dimension remains poorly understood.

The specific objectives of NuttI are to: 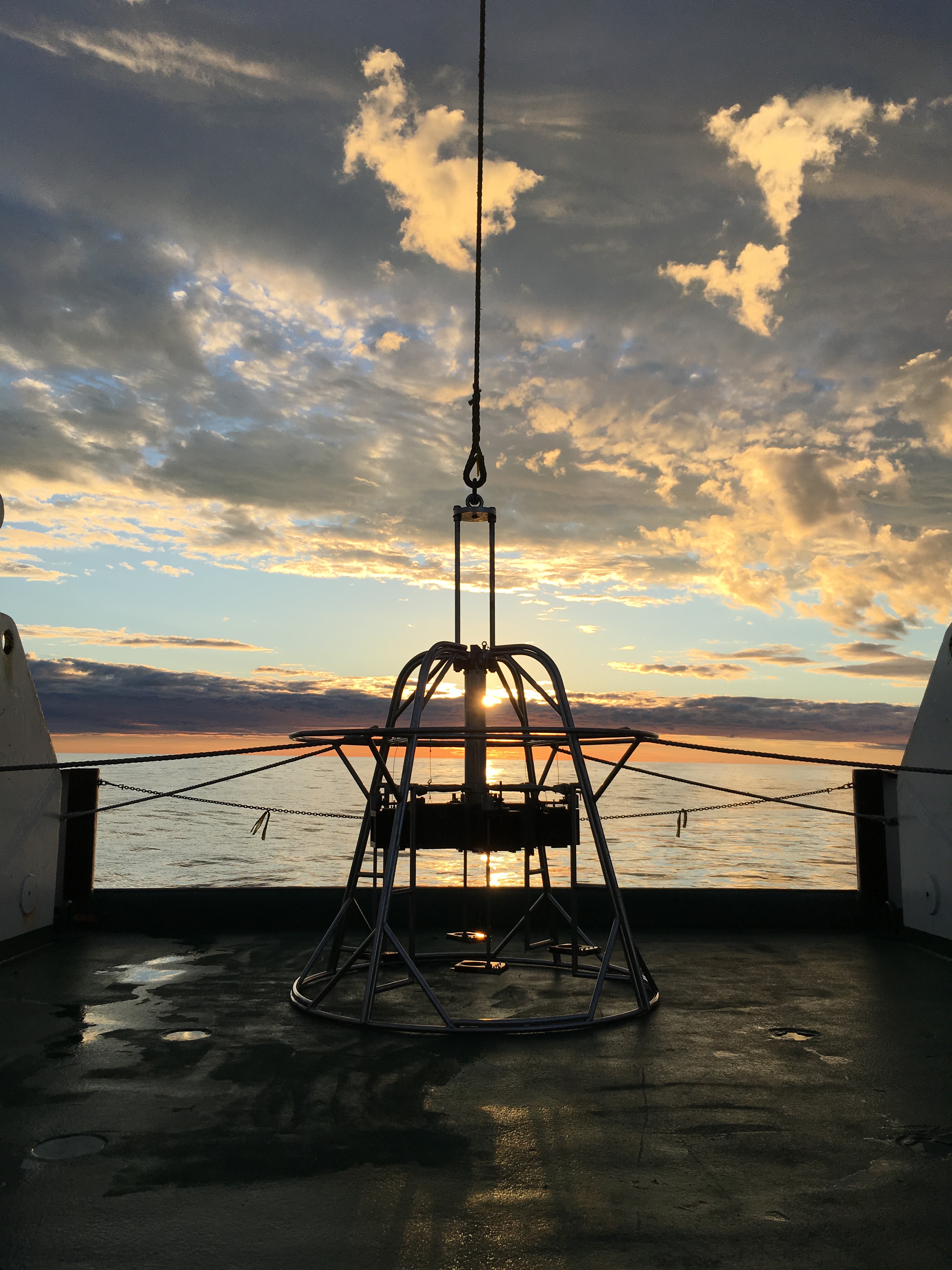 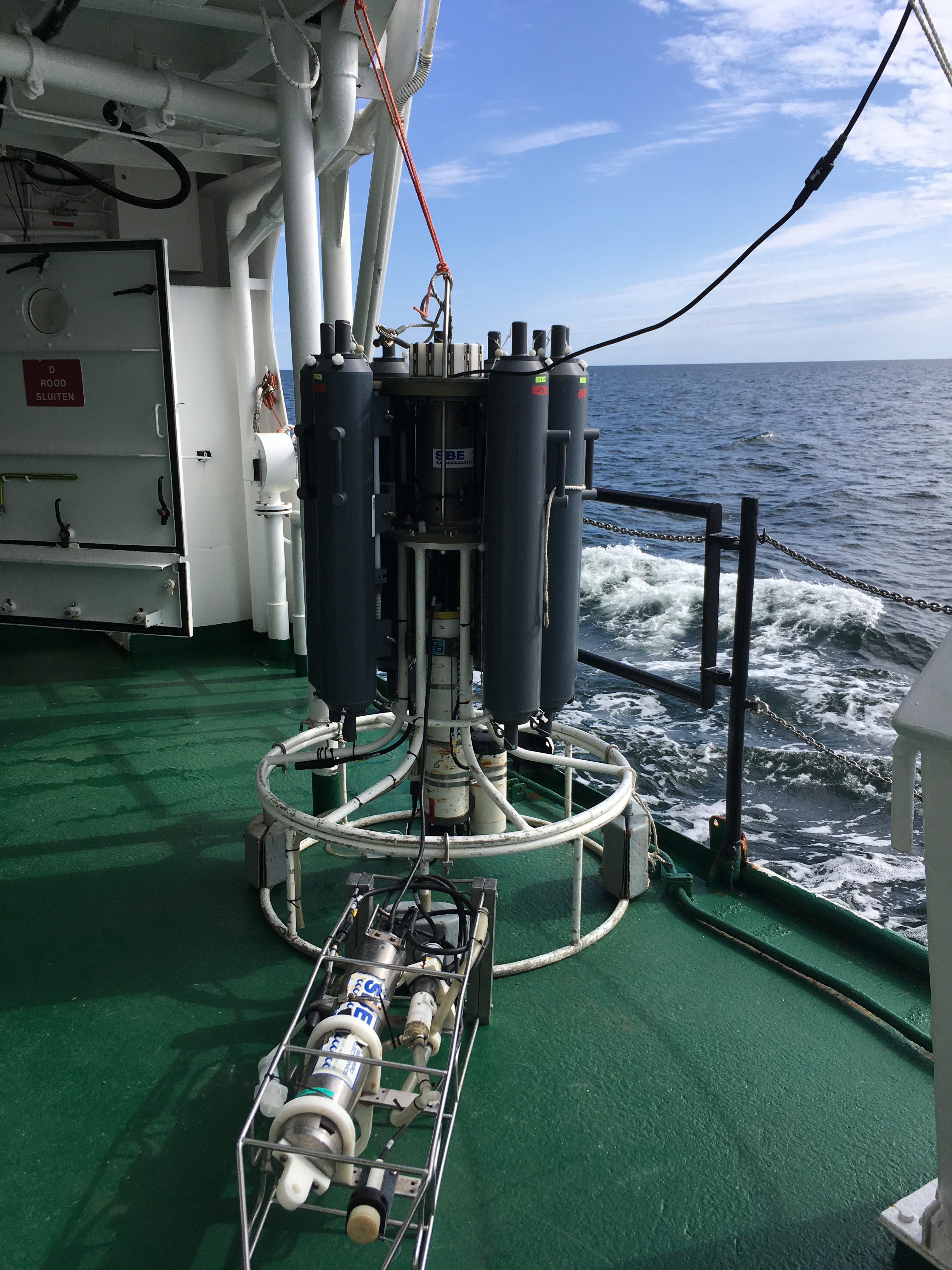 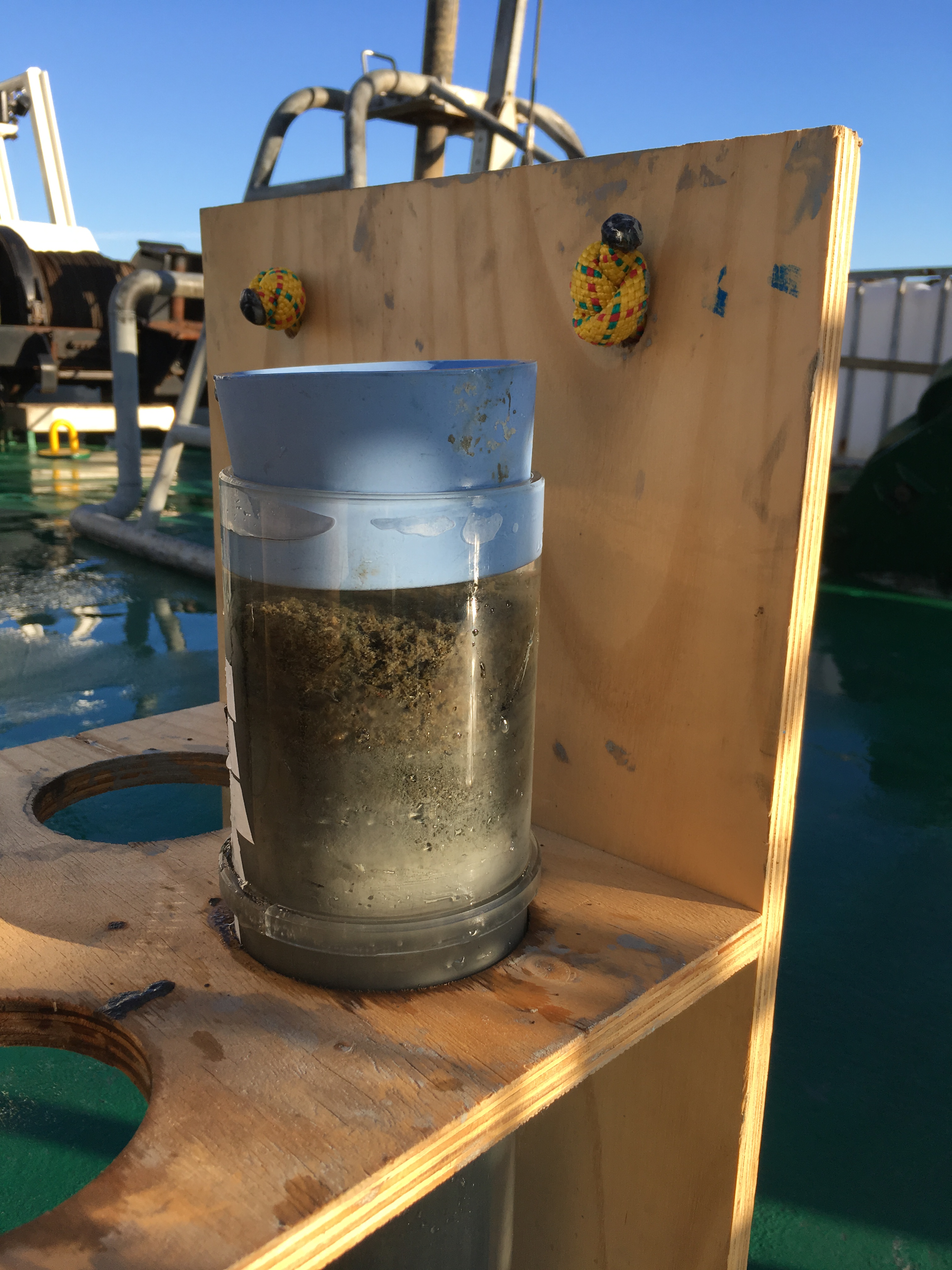 From the 18th of June to the 5th of July, Prof. Lei Chou, Nathalie Roevros, Audrey Plante and Hailong Zhang participated to an oceanographic cruise on board of the R.V. BELGICA in the Baltic Sea near Gotland Island. This was organised in collaboration with Prof. Martine Leermakers from the Department of Analytical, Environmental and Geochemistry (AMGC) at the Vrije Universiteit Brussel (VUB).

The deep waters of this area are often hypoxic which have a great influence on the biogeochemical conditions of the water column and sediments.

The objectives are to understand benthic nutrient and trace metal cycling, benthic‐pelagic coupling, diagenetic pathways and the impact of hypoxia on these processes.